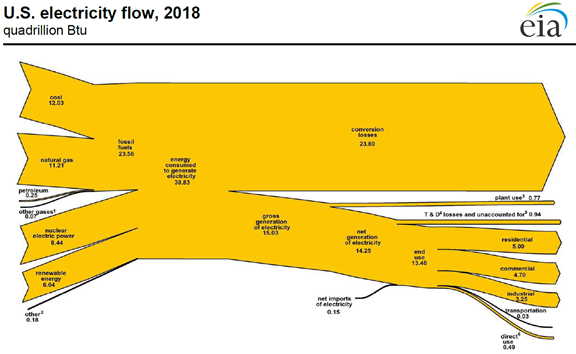 Electricity is a secondary energy source that is produced when energy sources such as coal, natural gas, nuclear, and renewable energy are converted into electric power. Conversion losses, which refer to the energy lost while generating electricity, totaled 23.8 quads in 2018, or 61% of total consumption.

In recent decades, the U.S. electric power grid’s fuel mix has shifted from mostly coal to a more diverse selection of fuels including natural gas, nuclear power, and renewable energy. In particular, the shift toward newer, more efficient natural gas-fired power plants with combined-cycle generators has resulted in an increase in the average efficiency of fossil fuel-fired electric power plants and in lower levels of overall conversion losses.

Source: U.S. Energy Information Administration, Monthly Energy Review
Note: Direct use of electricity is self-generated. It is either produced by the same entity that consumes the power or an affiliate, and it is used in direct support of a service or industrial process located within the same facility or group of facilities that house the generating equipment. Direct use is exclusive of station use.

The Emerging Flood Risk on the Lower Part of...

The Effect Of Earthquakes On Water Mains

Earthquake Impacts on Water and Wastewater...

Why we need to revise it  radically !

Talal Abu-Ghazaleh Aiming at graduate inventors rather than job seekers Dec 04,2018 – This article is motivated by the need to embrace a notion of […]

By E. William Colglazier – 09.13.2018 Over the past decade, the use of scientific expertise to advance diplomacy has achieved a number of successes in furthering peace, security, […]

Emerging Risks: what are the main risks for 2025?

Preparing for tomorrow’s risks means reflecting and taking actions on them today. That is why AXA surveys employees worldwide every year to identify the most […]

BY ROBERT LAMB How powerful will humans be in the 71st century? HIROSHI WATANABE/DIGITAL VISION/GETTY IMAGES Human technology has advanced significantly over the past 5,000 years, […]

Engineers create a robot that can ‘imagine’ itself

Date: January 30, 2019 Source: Columbia University School of Engineering and Applied Science Summary: Engineers have created a robot that learns what it is, with […]